Following another quarter that saw marketers pull back on their ad spending, Meta today announced it’s increasing its ad load on Instagram with the launch of two new ad slots. Amid a slew of product updates for advertisers, including a music catalog for advertisers and a new ad format for Facebook Reels, the company said it will now allow advertisers to run ads on the Explore home page and in profile feeds.

Called “post-loop” ads, these 4- to 10-second skippable ads and standalone video ads will play after a Reel has ended. When the ad finishes playing, the Reel will then resume and loop again. Like TikTok, many Reels are designed to be watched more than once — but stuffing an ad at the end could see users instead choosing to scroll to a new video instead of watching the same one again. This is a risky move, as people will also likely consider this a poor user experience.

Meta also said it will test “image carousel” ads in Facebook Reels starting today. These are horizontally scrollable ads that can include anywhere from 2 to 10 image ads and are shown at the bottom of Facebook Reels content.

In addition, the company is introducing new Instagram ad placements as a way to increase the surface for ads as it struggles to monetize its TikTok competitor, Reels.

This is being done through the addition of ads on the Explore home page and in the profile feed.

The Explore home refers to the page people land on when they first tap on Instagram’s Explore tab — the magnifying glass icon in the main navigation. Here, users can browse a page of suggested and trending content, or tap on buttons at the top of the screen to dive into various trends — like “indoor garden” or “box braids,” for example. Historically, Instagram had only placed ads on Explore within the Explore feed — that is, when a person taps on a post and scrolls. But now, it’s expanding to the Explore home page itself, as it says it sees users spending meaningful time there, Instagram told TechCrunch. This is already rolling out globally.

In what’s likely going to be another unwelcome addition from a consumer standpoint, Instagram says it will test placing ads in the profile feed. This is the feed that appears when a user visits another person’s profile on the app and then taps on one of their feed posts. Typically, this launches a vertically scrollable feed where you can then browse through the user’s past photos and videos. Now, this experience will be interrupted with ad units, as well, in a global test.

Instagram says that, as a part of this test, it will allow creators to earn extra income from ads that are displayed in their profile feeds. This test will begin with select creators in the U.S., to start.

That’s an interesting shift, as Instagram has been so heavily pushing its creators to film reels for its TikTok rival. Now, it’s essentially encouraging them to post more traditional content to their profile — possibly because this area is easier for Instagram to monetize.

These additional ad units serve to boost the company’s ability to pull in revenue at a time when Meta has been seeing declining ad sales. This recently resulted in the company reporting its first-ever quarterly revenue decline in Q2, shortly after its first decline in daily active users. While its revenue dropped only 1% in Q2, from $29.07 billion in the second quarter of 2021 to $28.82 billion in Q2 2022, Meta worried investors with a troubling Q3 forecast. The company said it saw third-quarter revenue potentially declining between 2% and 11% year-over-year to somewhere in the range of $26 billion to $28.5 billion.

Meta’s inability to monetize Reels, was cited among the factors contributing to the decline in Q2. Though the company touted Reels’ growth, noting that Reels now accounted for as much as 20% of the time people spend on Instagram, it wasn’t yet paying off in terms of revenue. As Mark Zuckerberg explained to investors, “Reels doesn’t yet monetize at the same rate as Feed or Stories. So in the near term, the faster that Reels grows, the more revenue that actually displaces from higher monetizing surfaces,” he had said.

In addition to the new formats, Meta also introduced other updates designed to create more effective ads, including the use of A.I.

Meta has struggled with the impacts of Apple’s privacy changes, ATT (App Tracking Transparency), which helped to power ad personalization. Now, it will look to A.I. technologies to aid in serving more relevant ads to users.

The company says that now, when a person engages with an ad, it will deliver ads underneath it that from other businesses it thinks may be of interest, powered by machine learning. 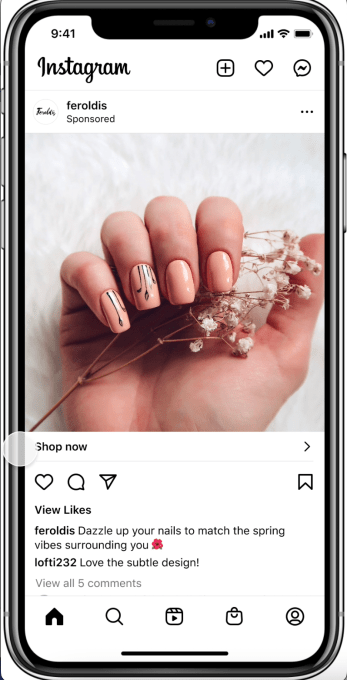 It’s also using A.I. to drive users to “Click to Messenger” ads to reach businesses through WhatsApp, Messenger or Instagram Direct. And it has introduced an ad format for lead generation through Messenger or a form.

Instagram is also launching the open beta for AR ads in Feeds and Stories, a format that was previously announced, and rolling out a song library with free music advertisers can use in their Reels ads. The music comes from the Meta Sound Collection, and the full library will arrive in the coming months. 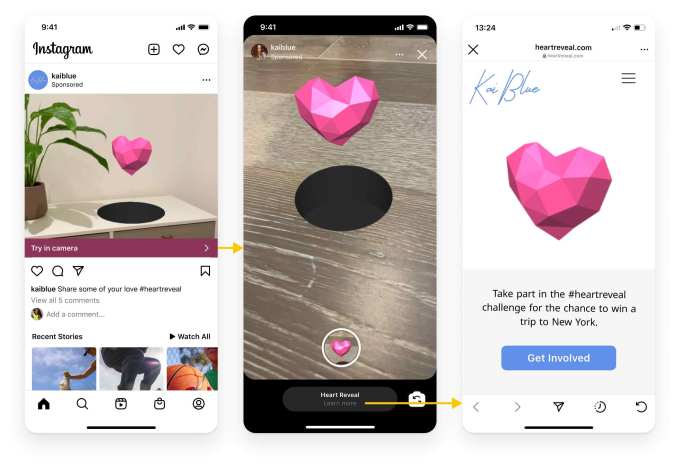 Reached for comment, Instagram couldn’t say to what extent these changes would increase the number of ads users would see, noting that the number would vary based on how people use the app.

“Ads have always been an important part of Instagram,” a spokesperson said. “From ads in Feed, Stories, Explore and Reels, we’re continuously thinking about new ways to help advertisers and brands get discovered. These new ad formats and tools aim to help brands tell their story, reach new and existing customers, and grow their businesses,” they continued.

“We closely monitor people’s sentiment – both for ads and overall commercialism,” the spokesperson added.

[mc4wp_form]
By signing up, you agree to our Terms of Use and acknowledge the data practices in our Privacy Policy. You may unsubscribe at any time.
admin October 4, 2022
Share this Article
Facebook TwitterEmail Print
Share
Previous Article Zipline’s drones to deliver medicine in Salt Lake City area
Next Article Ethereum Marks Three Consecutive Red Weekly Closes, Will Uptober Change Its Trajectory?