At its Search On event this afternoon, Google announced a number of shopping-related changes and new features across areas that include visual shopping, personalization and buying with the help of trusted reviews. The additions aim to help the company better attract online consumers to shop on Google, instead of starting their searches directly on Amazon — as has become the norm for many online shoppers today.

Of significant concern, Amazon has been steadily eating into Google’s core search advertising business over the years and is projected to capture 14.6% of the U.S. digital ad revenue market share by 2023, data from Insider Intelligence indicates. Google’s share meanwhile, is expected to drop to 24.1% by that time, down from the 31.6% share it had in 2019, the report said.

To combat this threat, Google has been investing heavily into its Google Shopping services, including by making listings free for merchants then integrating those free listings into Google Search results. Now, the search and ads giant has grown its shopping graph to 35 billion product listings — a figure that’s increased by nearly 10 billion over the past year, the company notes.

One of the new ways Google hopes to better compete is to make shopping on Google feel more fun for consumers than if they simply ran a product search on Amazon’s site.

On this front, the company is launching a new feature called “Shop the Look” in the U.S. which will be discoverable as part of the now more visual shopping experience on Google. This feature will position a shoppable display of products alongside lifestyle imagery, guides, and other tools in your search results. It can also be triggered by typing the word “shop” ahead of your query, like “shop bomber jackets,” for instance.

To “shop the look,” users will be able to view the product they had searched for — like a jacket — along with other items that complete the outfit, which can also be shopped from the same tool, similar to features previously launched with Google Lens.

They’ll also be able to see trending products that are popular right now within the same category of the item they searched for from across different brands and designers. (Google defines trending as those products that meet a certain threshold for an increase in searches and user interactions over the past week, it says). These features will arrive in the U.S. this fall.

To make shopping listings themselves more compelling, Google will soon begin to pilot test a 3D shopping feature for shoes, to follow up on its existing support for 3D home goods — a change that Google claims delivered increased engagement. Users interacted with 3D images almost 50% more than static images, the company said.

Initially, the 3D imagery will be tested with a handful of retail partners to start before scaling up. To support this, the company developed a way to automate 3D asset creation. Via machine learning improvements, Google can now use just a handful of product photos to build the 3D image. This new model relies on a neural radiance field technology, a type of neural network also known as NeRF, which can create novel views of 3D scenes using 2D images, Google explains.

Initially, the pilot will include a handful of merchants like Van’s and Skechers, but Google expects to add more over time, including smaller sellers.

“While some merchants have this kind of 3D imagery available, for many others — especially the smaller merchants — creating these types of 3D assets can be really expensive and time-consuming,” said Lilian Rincon, Senior Director of Product for Shopping at Google. “We really think has the potential to change the game for small merchants and we’re excited to get it out,” she added. 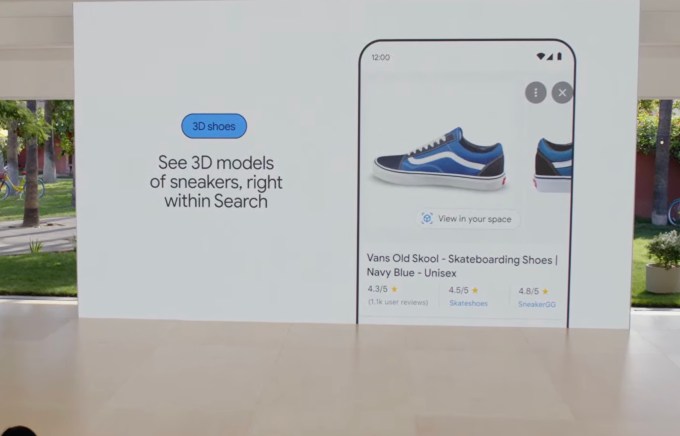 Another new feature is designed to help people make more complex shopping decisions that typically require a lot of research.

Typically, consumers will read a variety of sources to make a decision about a more high-value product, including product reviews, news, online articles, recommendation sites, customer reviews, and more. To simplify this process, Google has introduced a new “Buying Guide” which will aggregate the most helpful resources from across a range of trusted sources, including Google user reviews, articles, product reviews and more. This feature has launched in the U.S. but will expand to include more insight categories soon. 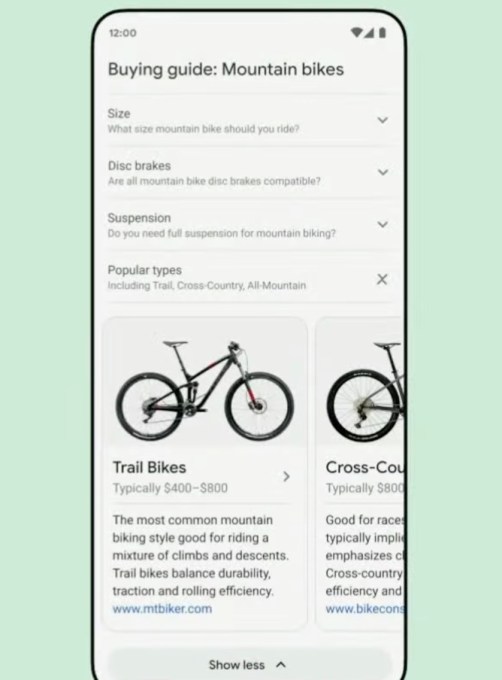 In addition, Google will add a new tool called “Page Insights” to the Google app in the U.S. in the months ahead. This will allow consumers to learn more about the products on a website, including their pros and cons and star rating. They can also opt-in to receive price drop updates on the items they’re tracking. 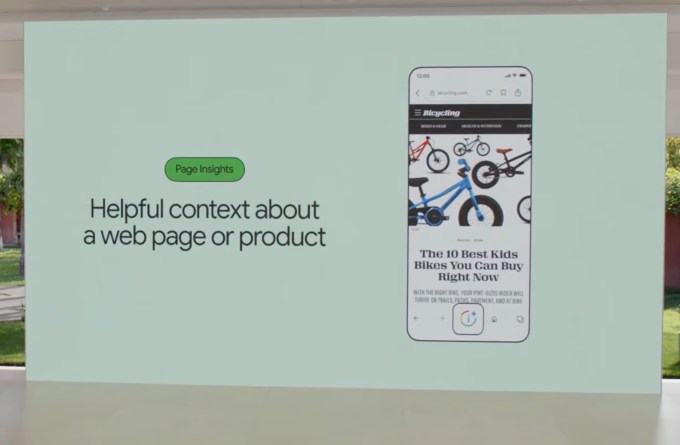 However, one of the biggest changes coming to Google Shopping is the addition of opt-in personalization, arriving in the U.S. later this year.

While companies like Meta and Snap have struggled with the impact of Apple’s privacy changes (App Tracking Transparency) that allowed users to opt-out of tracking, limiting sites’ ability to show them personalized ads, Google’s response to the privacy crackdown is to allow consumers to directly choose to personalize their shopping experience with intentional clicks.

To do so, consumers can tap buttons to direct Google to remember the types of categories they want to shop — like “Women’s Department” instead of the “Men’s Department,” for example — or even tap to choose favorite brands to ensure those are highlighted in their future Google Shopping search results. The company says the idea was prompted by its user research, as consumers told the company they were frustrated with seeing irrelevant search results.

Google says the user is in control of these settings and can turn them on or off at any time.

“We’ve taken a lot of time to do this very carefully because we absolutely want to make sure that people feel like they’re in control…if you, at any point, don’t want to share this information with Google — if you want to turn it off…you can do that,” says Rincon.

Google is also adding new shopping filters that appear on pages as you search for various products, which will now adapt to search trends. That is, you might see “wide leg” or “bootcut” appear when shopping for jeans right now, because those styles are currently popular across Google.com searches. These “dynamic filters” are live now available in the U.S., Japan, and India, and will arrive in more regions over time.

Finally, the Google mobile app will highlight suggested styles based on your past shopping searches and what others have been shopping for on Google. You can tap on these suggestions and see where to buy the products via Google Lens.

Combined, Google believes these changes will help to make shopping on its platform easier and, in some cases, more fun for consumers. But the larger reality here is that Google needs to find a way to keep users from diverting their searches to other sites, like Amazon, as doing so impacts its ability to sell ads and its bottom line.

[mc4wp_form]
By signing up, you agree to our Terms of Use and acknowledge the data practices in our Privacy Policy. You may unsubscribe at any time.
admin September 28, 2022
Share this Article
Facebook TwitterEmail Print
Share
Previous Article Is Short Bitcoin ETF Exposure Gearing Up For A Squeeze?
Next Article The Ethereum Merge: What Is Trading Headed Towards?