Gen Z social media app BeReal encourages its users to take a photo every day — a format designed to create a daily habit. But only a small number of the app’s users are currently doing so, new estimates from a third-party app intelligence firm indicate. According to research from Sensor Tower, BeReal is demonstrating significant traction across some metrics — it topped 53 million worldwide installs across the App Store and Google Play and has seen its monthly active users jump by 2,254% since January 2022, for example. But only 9% of its active Android installs are opening the app every day as of the third quarter of this year, it found.

Active users are a better indication of an app’s adoption than downloads as many people will install an app out of curiosity to check it out, but then abandon the app if they don’t end up enjoying the experience.

On this front, BeReal is still trailing established social media giants, Sensor Tower says. Today, 9% of BeReal’s active installs on Android (users who downloaded the app and are actively using it) are now launching the app daily. That’s far behind Instagram and TikTok. Instagram leads this category with 39% of its active installs opening the app every day, while TikTok comes in second with 29%. This is followed by Facebook, Snapchat, YouTube and Twitter at 27%, 26%, 20% and 18%, respectively.

To be fair, as a newer app, BeReal adoption on Android may not be at the same pace as on iOS. And with many of its new installs being from young people in the U.S. — where iOS is preferred — this may not present a full picture of the app’s current usage.

In addition, the report noted BeReal could improve this figure as it has continued to grow its monthly active users at a steady pace. Reached for comment, Sensor Tower declined to provide an exact figure for its monthly active user estimates (MAUs), however, only the percentage growth of 2,254% since Jan. 2022. 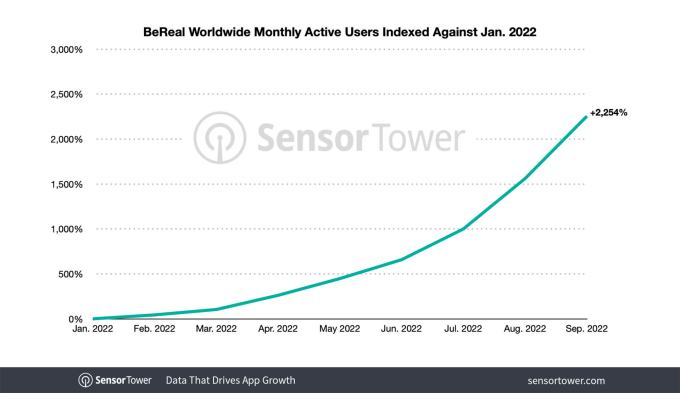 We should note that these sorts of estimates are not an exact science.

For example, another mobile app data firm, 42matters, estimated BeReal’s MAUs on Android were only up by 633% this year, growing from 43,899 MAUs in January to 321,787 MAUs by August 2022. This discrepancy between Sensor Tower’s data could be attributed to the fact that September was a huge month for the app, which would have impacted these estimates —  and Sensor Tower had estimated through September.

However, both firms more closely agreed on the number of installs the app has seen, with 42matters estimating the BeReal app across iOS and Android had seen north of 51.1 million installs to date, while Sensor Tower came in around 53+ million. The former also estimated the app is now seeing roughly 500,000 new installs daily with the U.S. helping to drive that growth. 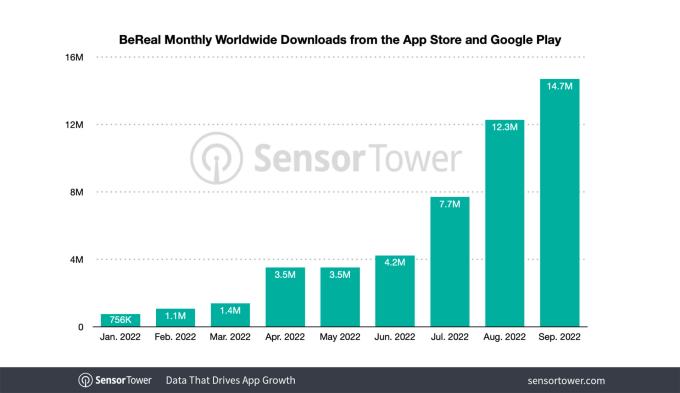 Although these figures indicate BeReal is moving out of “fad” status to become a part of some users’ daily routines, it hasn’t yet established itself as an app that’s able to drive as consistent usage as its competitors. At the same time, it’s dealing with copycatting from top social media apps like Instagram, Snapchat and now TikTok.

In July, Instagram began experimenting with a BeReal clone called Dual Camera, and in August tested an IG Candid Challenges feature, also similar to BeReal. Snapchat also launched a BeReal copycat in August, but its Dual Camera offered a variety of different placement options for the selfie photo. More recently, TikTok introduced its BeReal knock-off TikTok Now, which is available as a standalone app in global markets outside the U.S., where it’s only an in-app feature for the time being.

In time, these competitors could cut into BeReal’s growth potential, but so far that has not yet occurred.

BeReal has not commented on the estimates.

[mc4wp_form]
By signing up, you agree to our Terms of Use and acknowledge the data practices in our Privacy Policy. You may unsubscribe at any time.
admin October 10, 2022
Share this Article
Facebook TwitterEmail Print
Share
Previous Article Meilisearch lands $15M investment to grow its ‘search-as-a-service’ business
Next Article Apple TV+’s ‘Ted Lasso’ partners with Bumble to give users a blind dating experience