Earlier this summer, a Google exec admitted that TikTok was eating into its core Search business, particularly among younger users. But that’s not all TikTok is now being used for, a new Pew Research Center study indicates. According to the findings from a report that examined Americans’ use of social media for news consumption, 33% of TikTok users now say they regularly get their news on the social video app, up from just 22% in 2020.

Meanwhile, nearly every other social media site saw declines across that same metric — including, in particular, Facebook, where now only 44% of its users report regularly getting their news there, down from 54% just two years ago.

This data suggests TikTok has grown from being just an entertainment platform for lip syncs, dances, and comedy to one that many of its users turn to in order to learn about what’s happening in their world.

That may raise concerns, given TikTok’s connections to China — a topic it was recently pressed to clarify in a Senate hearing focused on national security. The hearing had followed the release of a BuzzFeed News report that had discovered how China-based ByteDance employees had been regularly accessing TikTok’s U.S. users’ private data.

If TikTok were to become one of the primary ways younger people in the U.S. learned about news and current events, then the app could potentially provide a channel for a foreign power to influence those users’ beliefs with subtle tweaks to its algorithm.

For the time being, however, TikTok is not a primary source of news consumption across social media — that honor still resides with Facebook.

TikTok was in fifth place by this ranking, as only 10% of U.S. adults said they regularly get their news on the video app. (Of course, when TikTok’s sizable user base of those under the age of 18 grows up, these metrics could quickly change.) 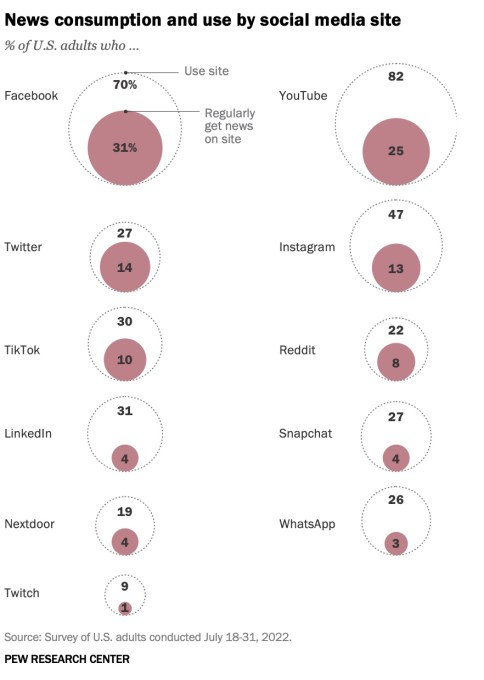 In addition, Pew somewhat backed up Google’s assertion that it was losing traction to TikTok and other social media apps, as it noted that the percentage of U.S. adults who got their news via web search had dropped from 23% in 2020 to 18% in 2022.

But it didn’t necessarily point to TikTok or any other social platform as gaining, as the percentage of adults using social media of any sort for news consumption dropped from 23% to 17% between 2020 and 2022, as did other forms of news consumption like news websites and apps. 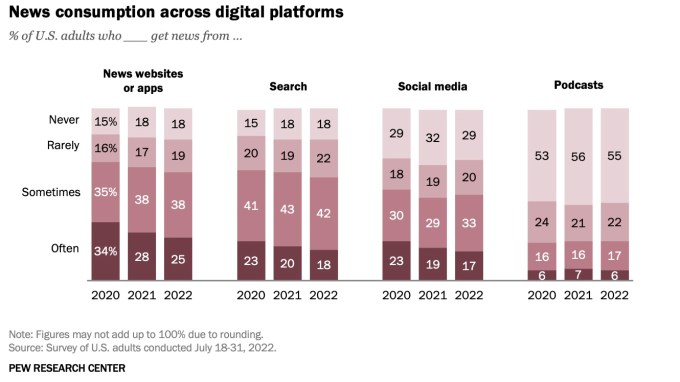 It’s not clear that any single platform is benefitting from these declines, as Pew didn’t uncover a shift from digital news sources to others, like, TV, print or radio — all those saw declines in news consumption as well. 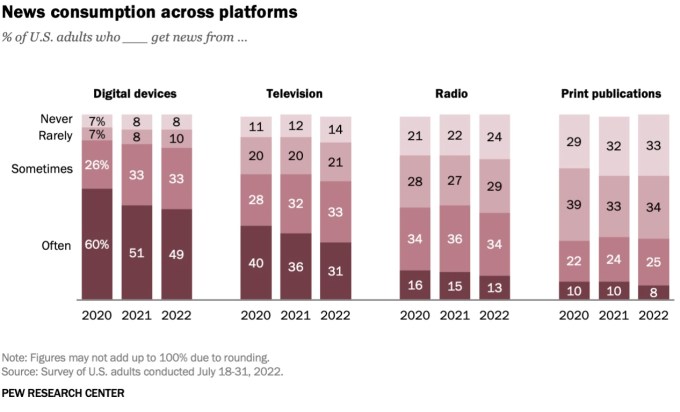 Still, digital devices continue to outpace TV, Pew said, as the latter has seen its usage drop as a source for news consumption from 40% in 2020 to 31% in 2022.

[mc4wp_form]
By signing up, you agree to our Terms of Use and acknowledge the data practices in our Privacy Policy. You may unsubscribe at any time.
admin September 21, 2022
Share this Article
Facebook TwitterEmail Print
Share
Previous Article ApeCoin Eyes $10 Ahead Of Staking, Could This Be A Bullish Catalyst?
Next Article When Will Crypto Winter Thaw Out? Total Crypto Market Cap TA